Thousands of people from Hong Kong risk losing access to their pensions if they come to the UK under a new visa scheme.

In retaliation at the UK offering a new visa, China initially announced it would not recognise the BN(O) passport as a travel or ID document from January 31, when the UK opened its doors. Some 3m Hongkongers hold BN(O) status – many with BN(O) passports – and are eligible to move to the UK under the new visa. And earlier this month, Hong Kong’s Mandatory Provident Funds (MPF) Schemes Authority – which is in charge of the city’s compulsory pension scheme – said: “BN(O) passports are no longer recognised as any form of proof of identity in Hong Kong. Thus, scheme members cannot rely on BN(O) passport or its associated visa as evidence in support of an application for early withdrawal of MPF.”

The practical effect is that “no organisation will accept it as a valid legal document,” said Alfred Ip, founding partner of law firm Hugill & Ip in Hong Kong, adding “the BNO visa [has become] highly political”. Hongkongers can withdraw their pension once before the retirement age of 65, for limited reasons including permanently leaving the territory. They must provide “Documentary proof satisfying the trustee that the member is permitted to reside in a place outside Hong Kong”, according to the MPF authority’s official website. According to Mr Ip there “has never been a problem for other places, it is only the BN(O) that the MPF authority is putting a hardline [on]”.

It is unclear if Hongkongers using other types of visas to the UK will have a problem accessing their pensions. “It is quite a lot of money, particularly helpful for those who are lifting their roots and moving families, especially those with kids, to a new place”, he added. Under the scheme residents aged 18 to 65 contribute a mandatory 5pc of monthly wages towards their pension, matched by the employer. These contributions are capped at HK$1,500 (£140) a month, though employees can voluntarily put more in. 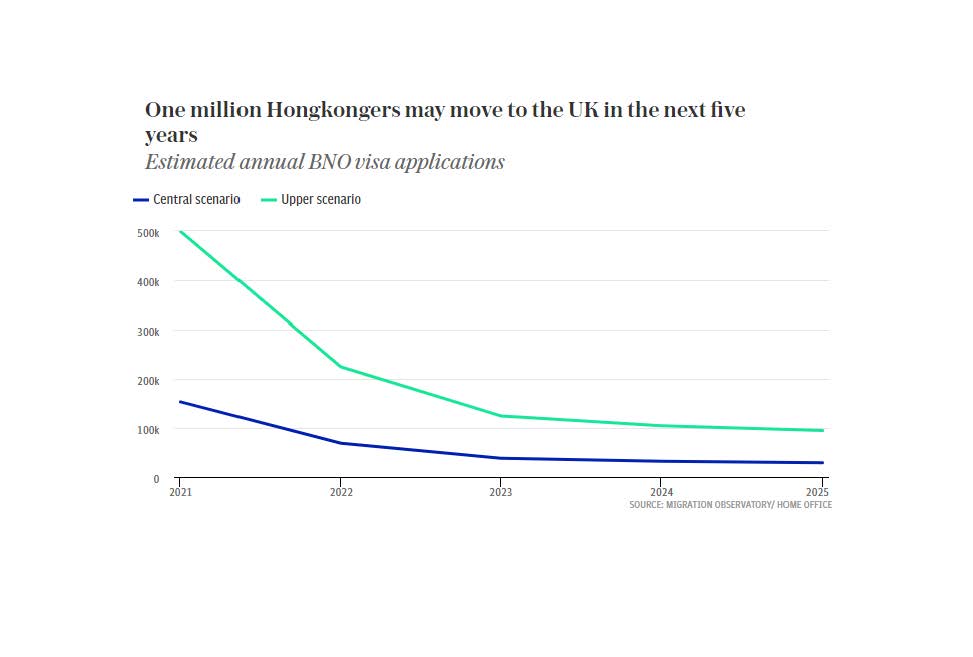 Hong Kong’s refusal to recognise the BN(O) visa as a valid document is “definitely a political move that tries to deter people from leaving Hong Kong,” said Nathan Law, one of the city’s most prominent democracy activists who fled to Britain last year. “It’s unfair for them to [be] unable to withdraw the funds that they earned when they have to [emigrate]”.

They may have to wait to become British citizens, or until retirement to access the money.

Aragorn Ho, who has applied for the BN(O) visa after leaving to the UK last September, worries he won’t be able to cash in his pension. “I have found a job but everyone needs the money,” he said, adding it would be equivalent to about half his yearly salary working for an estate agent in the UK. “The Hong Kong government knows people are leaving…so they are trying all means to make people stop by withholding their money”.

Government figures from last week revealed 27,000 Hongkongers have applied to move to the UK under the BN(O) scheme in just over six weeks since it opened. It marks a surge in applications as Beijing’s crackdown on the former British colony intensifies, with earlier reports suggesting just 5,000 had applied in the first two weeks.

All rights reserved – The Telegraph

What do you think of this article?
hello@hugillandip.com
Related

How Does the Hong Kong Tax System Work?