Bankers in Hong Kong can expect higher salaries and fat bonuses as the city battles to protect its position as a global finance hub amid a flight of talent in part triggered by strict pandemic-control measures.

Talent shortage is likely to be the top challenge for banks operating in Hong Kong in 2022, and companies are offering to significantly bump up the salaries of new joiners to make sure their growing businesses are well staffed, according to recruiters.

“The norm we’d advise candidates [on] when moving is to look at a 15% increment, 20% if incredibly sought after or close to single-digit increments for lateral moves,” Abimanu Jeyakumar, head of recruitment firm Selby Jennings, North Asia, said in an interview. “However, the average increment we are seeing this year is 30% up, [and] for some hard-to-fill mandates we have seen increments go north of 50%.”

Hong Kong banks are facing a talent crunch at a time when the city’s wealth management industry is expected to grow 6% to 10% annually through 2026, from a 2021 estimate of US$1.45 trillion, according to a survey by the local Private Wealth Management Association. 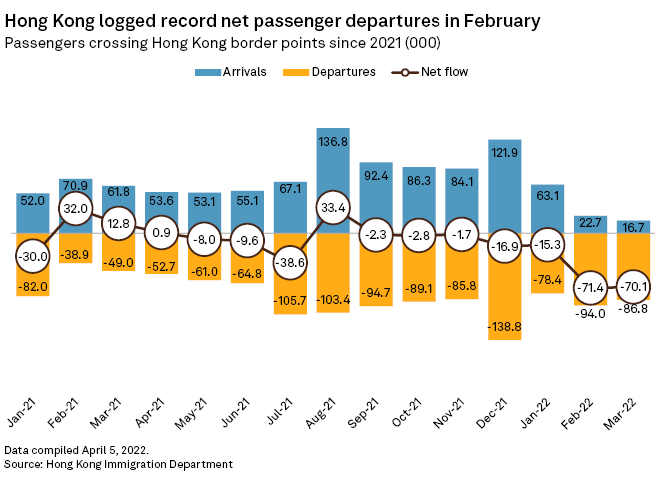 A net 70,087 people left Hong Kong in March, following a record in net monthly departures of 71,354 in February, according to passenger traffic data from the immigration department. The outflow is at its highest in two years, after years of more people coming into than leaving the city. The numbers do not capture whether these passengers are leaving temporarily or permanently, but they do indicate that more people are likely shifting to other places.

Bankers have also quit to pursue careers at technology companies as well as crypto or blockchain platforms. For those who stay, employers are offering flexible work arrangements, working one to two months outside Hong Kong, such as in the U.K., the U.S. or Asian locations in Thailand or Indonesia’s Bali, recruiters said.

Although Hong Kong has eased some measures, bringing down the mandatory quarantine period to enter the city to seven days from April 1 versus 21 days until earlier this year, and lifting a ban on flights from nine countries including the U.S., the U.K. and Australia, it is too early to tell if it will stop people from leaving.

“I have a very good feeling that some of our financial institutions are losing patience about this sort of isolated status of Hong Kong,” Carrie Lam, Hong Kong’s chief executive, who announced at a press conference on March 17 that she would not seek another term as the city’s leader.

Once in Hong Kong, people are not able to freely travel to visit friends and family in their home countries or to meet with international clients and key contacts abroad, said Andrea Randall, Hong Kong-based partner at law firm RPC. “Shortening the length of quarantine will greatly assist, and will bring Hong Kong closer in line with the restrictions in Europe and the U.S.,” Randall said.

A survey by the European Chamber of Commerce in Hong Kong released March 24 found that 49% of companies are considering relocating their offices fully or partially in the next 12 months due to the restrictions, further reducing the pool of talent in Hong Kong. Yet, Hong Kong remains the leading financial sector of the Asia-Pacific region, according to the 31st Global Financial Centres Index released March 24 by think tank Z/Yen. Its rank dropped slightly to the third spot globally from the second spot last year.

The relaxed rules show that Hong Kong is reacting to pressure from people and businesses to open up the city, Selby Jenning’s Jeyakumar said.

Selby Jennings received a 39% increase in job mandates from clients between the start of 2022 and Feb. 15. The demand was “far greater” than in the two previous years, and the number is likely to be much higher by the end of the calendar year, Jeyakumar said. In order to satiate the demand for talent, banks are also looking overseas to fill talent gaps, Jeyakumar said.

“On a more macro scale, we have observed a general decrease in talents within Hong Kong, where there is a percentage of candidates moving out … This has likely been brought on due to the extended period of travel restrictions over the past two years,” said Olga Yung, managing director at recruitment firm Michael Page in Hong Kong.

Most hires seek an increment ranging from 15% to 35% and expect a bonus when taking a new role. Demand across front- to back-office positions is high, although there is naturally a high demand for roles in sales, Yung said. Candidates are also considering newer factors such as how supportive companies can be with flexible working arrangements, she added.

Apart from substantial pay rises, banks are also commonly using a “golden handcuff” tactic, which is a hefty one-off payment to the employee to stay on for a specified period and an agreement restricting their joining a competitor for a certain period after they depart the firm, RPC’s Randall said.

“We have advised on a number of these agreements, particularly in the hedge fund world where skilled portfolio managers and researchers are in short supply in Hong Kong, despite plenty of capital in the market,” Randall said.

The regular practice of banks terminating the bottom 5% of performers each year is not necessarily playing out the same way as in prior years, said Adam Hugill, Hong Kong-based partner of Hugill & Ip Solicitors. This “indicates to me that there is some pressure on banks to retain staff.”

The article was originally published on S&P Global

What do you think of this article?
hello@hugillandip.com
Related